When I first officially received 'The Calling', I was at my fire circle in 2003 having 'spirit time'. My guides said, "We want you to become ordained at the church." Surprised and dismayed, I said, 'what? why? I don't want to be a minister!' They told me that there is a reason and to trust them. Which I have learned to do.

I had been involved in my Grandmother's church for 10 years at that time. Many people told me over the years that I would become a minister too. I had zero desire or interest in that. My responses were always, 'no way', 'not a chance', 'it's not for me', etc.

After relaying the message from my guides to Grandmother and a few other ministers, they acted like I won the lotto. They were excited, I was reluctant. They got busy preparing for my testing....I was officially ordained the next year.........

They Came A' Callin in Robes of Light!

Flash forward to 2017, I had an important dream the morning of August 27th that woke me up. There were several beams of light that sprang up in front of me. Each one had a triangle on top of it. It seemed to me that there were seven of them.

The one in the center came forward and the triangle dropped down to the center of the beam. A male figure appeared within it and began speaking to me, animating his hands as he talked. He spoke at length but I could only remember his first sentence, "We want you to start a ministry."

Read about my Cherubim findings in Deep Soul Issue 1. You can subscribe below.

As they were leaving, it was conveyed to me that someone else would be talking to me next. It was then that a cherub came floating down in a semicircle fashion. He also talked for awhile but I didn't remember any of it. Then I woke, going over and over it, I tried to recall details. Since it didn't reach my consciousness, I figured it must be stored in my subconscious mind.

My mind was spinning, I was shook up. I had many questions like 'What do they mean?, What kind of ministry?, What am I supposed to do?, Is this about my website?, etc...'

One thing for sure, I didn't take this lightly - because of the bond and trust I have with my "Spirit Band" and Their guidance throughout my entire life. This was a dramatic shift and totally unexpected. I knew They were serious and They know that I'm a willing channel. They've never asked anything of me except this. And this is due to my own asking for direction through the years.

I thought about it for half the day before I told my husband. He smiled at me approvingly. I told him that I can't see us starting a church so they must mean for me to use my website. Then I realized that this was Their response to what direction I should take my site as I've been trying to decide this very thing! 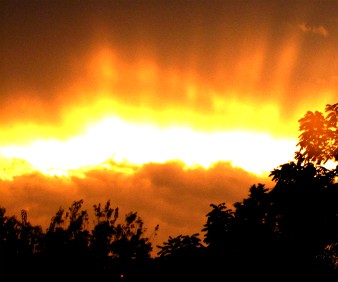 That 'Call' was all I could think about from then on. I said that I would agree only if They were there to help me along the way. The next day I was looking for inspiration so I grabbed Robert Schuller's book, 'Living Positively One Day at a Time.' I asked for guidance and opened it at random. The passage was Philippians 1:6> "God at work in you will give you the will and the power to achieve His purpose." Funny how the right message comes at the right time!

I started talking to the 'Beams', asking them to tell me specifically what I should do. I went to sleep that night asking many questions. The next morn, I clearly heard, "Share what you've been taught."

The Name Reveal Seals the Deal!

Still unsure, I asked Them for a new site name. I'd had one in mind before the dream but it didn't seem to be quite right AFTER the dream. Honestly I was wondering if I would get a response. But the next morning, I woke to a vision of a sun rising over a mountain and at the same moment I heard what is now my domain name> Sunshine on the Soul.

It was then that I was all in. I wanted to be certain They were really participating in this with me.

Just before writing this page, I was looking through some of my "Spirit Writings" and was amazed at the references of the sun and the Soul and many other stunning things.

They conveyed to me that it's not 'Their path', it's 'Our path'. This I understood knowing that we are a unit - a Soul Group. At our base is Love for the Higher Good of ALL. We seek to serve the Holy Light of Creator!

Do you feel that you have an inner calling? Use your intuition to perceive what your Soul is telling you. Now is the time. Can U hear your Soul Calling?