Mystic Christmas is a holiday beyond the religious standards it is claimed to represent. It has taken on a life of its own.

Begun as a pagan festival celebrating the re-birth of the Sun King, signified by the emergence of the waxing sun (from the winter solstice until the summer solstice) from the waning sun cycle. The increasing sun promises renewal and fertility.

The holiday was adopted and adapted into Christianity in order to unify the people under one religious rule under the Roman Emperor Constantine in 325 CE. Some Christian sects have protested the Christmas holiday because of it's pagan roots.

People today know that December 25th is not the birthday of Jesus but it is still accepted to be a celebration of that event.

The Christmas holiday has surpassed religion in America to become a cultural holiday of gift-giving and celebrations of friendship, family and charity. It has gained a national status primarily through family traditions.

Christmas is even celebrated in public schools with parties and pageants. I grew up in the public school system in the 60's and 70's. There were very few students in the school whose families did not recognize the holiday. The rest of us were astonished because we didn't understand, after all, we looked forward to it all year. We felt sad for the kids that did not get to have a Christmas.

I've heard a lot of skepticism about Christmas, usually from men. They like to point out that it is a commercial holiday and a gross waste of time and money. I have concluded that besides the churches, women and mothers are the primary force that keeps it alive. We love to gather with family, we love to give, we love to shop and we especially LOVE our babies! So we say, 'Christmas is for the children'.

But we love it too.

Although people celebrate Christmas in different ways and for different reasons, it has become a happy holiday for most. It is a beautiful festival marked by generosity, charity, hope and goodwill regardless of the belief system you subscribe to.

When athiest groups targeted Christmas in recent years, employees dealing with the public were being told to say 'Happy Holidays' instead of 'Merry Christmas' (to be politically correct without hurting sales!). Other infringements on the 'free speech' and 'freedom of religion' of the public were being pushed concerning the holiday. The American public pushed back. "We love Christmas and we'll call it what we want!" People went out deliberately telling everyone in sight - "Merry Christmas".

The holiday is deeply ingrained in our society. What's so bad about that? Whether we are celebrating the birth of a messiah or the lengthening of days, or fun, family and tradition, Christmas IS a great American holiday. AND it's good for the economy! 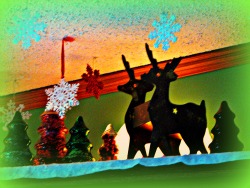 In my family, it was my mother's side that revered the holidays, especially Christmas. My Grandfather was a Pennsylvania Dutchman. He made sure that his family had a big Christmas. It was important to him.

He was a volunteer fireman after leaving the U.S. Aircorps and remained so for the rest of his life. He would dress up as Santa and pass out bags of fruit and candy to kids from the firetruck. The firemen would park in different locations and neighborhoods throughout town for this giveaway.

My Grandparents were the hub of the family traditions. As family grew, married into other families and relocated, holiday gatherings changed. Some couldn't attend. None the less, the tradition continued. Holidays became like family reunions for those that could come.

I made every attempt to be at every holiday at their house, the only exception was when I lived in another state during my early 20's. I felt that the tradition was important for my kids (and eventually grandkids).

As my Grandparents aged, and my own family had grown immensely, our major celebrations began to take place at our house. But we would always spend a part of the holiday with my maternal Grandparents.

The last time I saw my Grandfather in his body was on Christmas Eve. He was in his usual chair seemingly sleeping 90% of the time we were there. The kids were running around, there was a lot of laughter (the norm), food and gifts. He slept through it all. We always brought Grandpa sweet treats because he loved them.

As I had my hand on the doorknob to leave, he opened his eyes and looked directly into my eyes and mouthed the words "thank you", then went immediately out again. Shortly after that day, he crossed over. It might not seem like much, but it meant everything to me. That gesture was perfectly timed and a deliberate attempt on his part to communicate his appreciation to me.

Usually a special time for me, I was being tested. The attitude of my two teenage kids, that were still at home, almost discouraged my fun. They didn't want to participate in any decorating, which until then, they jumped on the opportunity to decorate the tree. They even told me that it was silly and that we didn't need a tree.

"What! No tree??!! That's the best part!" They didn't want to be bothered with it. I was mad, peeved, disgusted...and a little sorrowful. I laid on the couch pitifully depressed.

As I stared at the naked tree, I decided that I wasn't going to let them ruin my holiday. I gathered up the boxes of ornaments (which, by the way, are SPECIAL) and lights and got busy. They actually laughed at me. I told them to get lost in Arabic (they knew what it meant - it wasn't the first time they heard it).

After completing my masterpiece, I laid back on the couch to admire my work. I stared at the tree, dressed in all it's glory, and became mesmerized. I drifted into a blissful state of reflection.

I recalled a spirit journey that I had once. I was flying over the landscape when I saw some people on the ground in a forest. I descended into this clearing. I was then aware that I was a part of this group of people. We were all moving toward this giant evergreen tree. The feeling was one of great reverence. The tree was filled with fairy lights. We started singing while circling the tree. The atmosphere was filled with a unified energy. We were ONE. We were total love, total peace and totally joyful. It was a WOW moment! We were aware of the tree's awareness of us and it's intelligence.

My focus came back to the room and my personal tree. It appeared to be the prettiest tree that I'd ever seen. It seemed mystical and alive with energy. I felt the presence of guardian and ancestral spirits. My heart skipped a few beats. It was clear that the real power of Christmas is in the SPIRIT of unity and the joyfulness of an all-consuming love.

People celebrate Christmas in many ways and for their own reasons. I choose mine to be a Mystic Christmas that reminds me of my connection to this realm, to those I'm close to, to eternity and to a universal soul.

We are never alone but many people do not know this. Some people are physically alone which makes the family oriented holidays a sad time for them. If you know of folks in this situation, don't forget to include them somehow or brighten their day in your own way. Mystic Christmas seems to bring out the best in people, that's because it is a mystical holiday!

May you have a Merry Mystic Christmas and an Adventurous New Year!