Easter is a mixed tradition like most holidays (holy days). It wasn't widely celebrated in America until after the Civil War.

Originally an ancient festival to celebrate the return of spring, honoring the goddess of spring, fertility and offspring. She is found in many traditions with differing versions of her name: Eostre, Ostara, Ostra, Oestre, Ostern, Ishtar...

Her symbol is the rabbit which represents fertility, puberty and the moon. Spring is the fertility season for rabbits after all.

German immigrants are credited with bringing the Easter Bunny to America in the 1700's.

Second century missionaries attempted to combine the observance of Christ's Resurrection with the Easter celebration in order to unify both traditions under Christianity.

Timing Set: At the famous Council of Nicea in 325 AD, Roman Emperor Constantine handed down the rule that the official date of the Easter celebration would be the first Sunday after the full moon - after the Vernal Equinox. This causes the date to change from year to year so it's often called the Movable Feast. 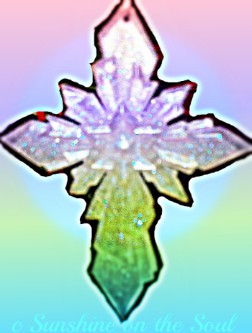 The timing is based on Jewish Passover (the first full moon after the Vernal equinox) which is the reported period that the Crucifixion and Resurrection occurred.

The sun's ascension in spring represents the Ascension of Christ.

The rising sun indicates the rebirth of life after death and the ascension of the god-man who transforms into the Sun King to watch over humanity > the Christed One who has sacrificed himself to bring enlightenment and peace to those still residing in the Earth plane.

The significance of Christ's Resurrection during the Spring Equinox season is to demonstrate the triumph of the soul and personality over all earthly conditions, even death.

Having overcome the world, the man Jesus (Yeshua) integrates into his God-self, the Christ, the Living example, teacher and healer for humanity.

For we all emerge from physical death into our true body which cannot be destroyed.

As in nature, spring comes after the winter's rest and we live again. All things in Heaven and Earth can be renewed, transformed and reborn.

The sunrise service is meant to welcome the life force of regeneration and renewal as the Earth awakens, represented by the Sun god, to celebrate the increasing Light of the growing season.

The coloring of Easter eggs is an ancient practice. They were colored by boiling them with various plants to create bright colors to represent the colors of spring and the sun. 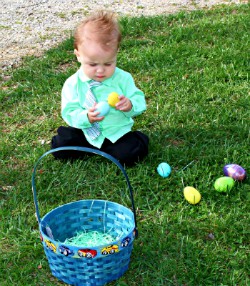 They were given as gifts and used for exchanges, games and contests. Wishes were made on the eggs to bring growth, prosperity and happiness.

Eggs represent birth and regeneration> the cosmic egg which is the nucleus of creation and the promise of new life.

The egg hunt is central to many family traditions on Easter. I mean, who doesn't like an egg hunt?? Especially when they're filled with candy, trinkets or money!

Easter was always a big holiday in my family thanks to my Great-Grandmother, who passed it to my Grams. We had the dinner, then the egg hunt, then the yard games like croquette and horse shoes (or board games if it was raining).

There was one year that all the kids thought they were too big to participate, but that didn't stop Grams - she decided that the kids would hide the eggs and the women would find them.

Due to the unpredictability of spring weather, sometimes the hunt happened in the snow or rain, and sometimes inside. Like Christmas, it was a sort of a family reunion.

Every day is a resurrection

And an awakening of

To the knowledge of

I found this acrostic poem in an April 1975 issue of my Grandmother's Psychic Wheel magazine. I'm sure she probably wrote it >>>>>>>>>

Easter heralds the spirit's resurrection from the dormancy of winter (darkness) into the dawn (light) and the extended days of spring, bringing renewal and the potential for growth (fertility).

The spiritual self arises and awakens from the limitations of the physical and material realm of thought into the expansive view of the soaring eagle (Spirit; symbol of the East). 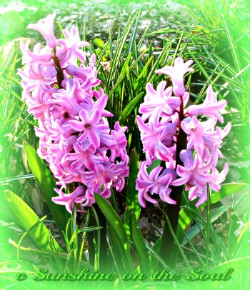 As pointed out by White Eagle in "The Way of the Sun", many spring flowers represent the six-pointed star - daffodils, crocuses, hyacinths, Star of Bethlehem, etc....with their six petals. Many also have another little star in their centers.

The six-pointed star represents the unity of God and man, the higher and lower self, the spiritual and physical self.

"God manifesting in man, made perfect through the gentle Christ spirit within his being....the unfolding of that flower of the divine spirit within you."

"The Sun of God  (by which we mean the life-force which flows from the heart of God, which is love)  will enter in fullness and richness into man's being in the same way as the sun enters into the seed quickened to life in Mother Earth. As nature is quickened by the same force of love, so man will be quickened and grow to perfection."

Easter is a mix of ancient customs, symbols and spiritual meanings all based around the Spring or Vernal Equinox. It's a fertility festival celebrating rebirth upon Mother Earth - representing new growth and the revival of the planting season, marking one phase in the cyclic nature of eternality.

Each phase carries with it an important and necessary energy. Use it to your advantage.